No matter age or ability, we've got a coaching session to suit.

If you're 16 or over, come along to our open adult sessions, designed for all abilities & ages to enjoy some social physical activity.

Looking for a way to make the most of the school holidays?

Whether your child is looking to try basketball for the very first time, or they are keen to improve their game, our basketball camps are always jam-packed full of skills and smiles.

Diddy Dunkers camp days always include competitions, skills, matches, analysis and even opportunities to learn how to referee!

Diddy Dunkers is one of the UK's most successful, exciting and fastest-growing basketball coaching schemes. If you'd like to become part of the team and run your own branch of Diddy Dunkers, please send us a message - we'd love to chat!

"My son went from initially enjoying the sport as a pastime to loving it. He has learnt so much... and also grown in so many other ways. Coach Pete inspires great teamwork and communication within the team, supporting players of all abilities, dedicating so much time to developing them and helping them grow."

"Diddy Dunkers has been great for my daughter to learn coordination and social skills, plus she has made new friends and learnt how to be part of a team. She has learnt how to win, lose, and how to respect opponents. It's very inclusive for new players, always making sure they are involved, and families are welcomed at matches which makes a great atmosphere."

"The biggest thank you goes to Pete Daines, boss of Diddy Dunkers, for his outstanding coaching skills, amazing and funny work with kids. I couldn't ask for a better coach for my child! Your service today was out of any league and I'm glad we chose a basketball theme for the party."

"Having worked in national teams for 9 years I can say with clarity and evidence that Pete goes above and beyond the call and exceeds the criteria to be an effective international team manager."

My son is autistic and has Tourette’s syndrome. We were told he wouldn’t be a team player and to look for individual sport for him. After joining Diddy Dunkers, the coaches are great with him; he has progressed so much. It’s incredible to see my son making friends and being part of a team."

"I can't recommend Diddy Dunkers highly enough! My son has grown in skills, fitness & confidence as well as making some great new friends. He has a real passion for basketball now, which you can see in all the kids, thanks to the incredibly skilled coaches."

"Pete has an exceptional ability to communicate on multiple levels to get facts and messages across. Underpinning these strong traits is the constant adaptability to situations which enables Pete to cope and thrive in different and changing circumstances, no matter how challenging they may be"

"It’s rare to have a club where girls and boys mix together in a competitive but inclusive environment. Joining Diddy Dunkers and progressing onto the Silverbacks has been one of the best things we’ve done, and would recommend Pete and his club to any girl or boy, any age."

Coach Pete is on a mission - he wants to make basketball more accessible for everyone.

Pete set up the Silverbacks in 2010, and followed up with Diddy Dunkers in 2014. Since 2010, the adult Silverbacks teams have won 5 promotions, 2 league titles and 4 playoff championships. His Silverbacks junior sides have won 9 titles and counting... as coach of the Yateley Manor School teams Pete has won 8 National titles with U11 & U13 age group teams, and once had an unbeaten run of 61 matches!

Pete was also Great Britain U18 Team Manager, taking his team to 6 European Championships. As a former national league player, he’s also been a member of (and trained with) the GBMaxibasketball 45+ squad.

He’s been recognised as South of England Basketball Volunteer of the Year, inducted into the Wessex Basketball League Hall of Fame, and is a former winner of the Eagle FM Radio station ‘Community Sports Hero of the Year’ for his work with the Silverbacks and national teams.

Outside of basketball, Pete's a huge sports fan. He especially loves to watch cricket, athletics, NFL, and football/soccer (he's a keen Liverpool supporter). 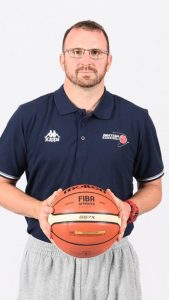 How do I pay for weekly coaching sessions? Collapse

You're able to pay for weekly sessions on the door using cash or Visa, Mastercard, and American Express.

How do I pay for day camps? Expand

Day camp tickets are purchased through our partner, Eventbrite.

You're able to buy tickets, through Eventbrite, using Visa, Mastercard, and American Express.

Can I cancel a day camp booking? Expand

Yes, you're able to cancel your ticket and get a full refund up to 7 days before the day camp.

Are the junior coaches vetted? Expand

Yes - all our Diddy Dunkers junior coaches are DBS checked.